This is a great pride of our school that students of class VIII & IX who participated in different National and International Fests won prizes.

GOI Peace Foundation and UNESCO jointly organized an essay writing competition for children all over the world.The topic for the essay was – “My role as a citizen of the earth”. Emy Thomas won the third prize in this competition.

In the Year 2014, Our students hoisted the flag of St.Mary’s Excelsior in almost every field of competition . They won the prizes and Awards for National level championships, State level championship, District level tournaments, Inter school competitions for games and sports. They received Prizes and Awards for Debate, Creative Writing, Poem and quiz in inter school Competitions. St. Mary’s students also won the prestigious award for Poem and creative writing on ‘CANCER’ organized by medical colleges of our city. We feel proud of them. 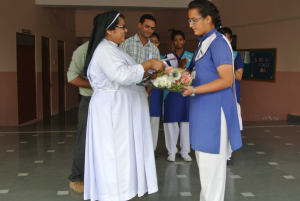